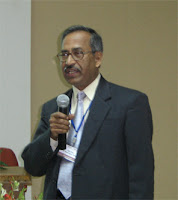 Prof. Ajit Pal is presently Professor, Department of Computer Science and Engineering at the Indian Institute of Technology, Kharagpur. He obtained his M. Tech. and Ph.D. degrees from  the Institute of Radio Physics and Electronics, Calcutta University in 1971 and 1976, respectively. Before joining IIT Kharagpur in the year 1982, he was with the Indian Statistical Institute, Calcutta, ITI, Naini and  DLRL, Hyderabad in various capacities. He became full Professor in 1988 and  served as head of Computer Center from 1993 to 1995 and head of the Computer Science and Engineering Department from 1995 to 1998. His research interests include Real Time Systems, CAD for VLSI and Computer Networks. He is the principal investigator of several Sponsored Research Projects including "Low Power Circuits and Systems" sponsored by Intel, USA. He has over 90 publications in reputed journals and conference proceedings and a book entitled "Microprocessors: Principles and Applications" published by TMH. He has supervised four Ph.D. students. He is the Fellow of the IETE, India and Senior Member of the IEEE, USA.