1. Function corresponding to the Bode plot of the Figure below is

2. A fixed capacitor of reactance –j0.02 ohm is connected in parallel across a series combination of a fixed inductor of reactance j0.01 ohm and a variable resistance R. As resistance R is varied from zero to infinity, the locus diagram of the admittance of this L-C-R circuit will be
(a) A semi-circle of diameter j 100 and center at zero
(b) A semi circle of diameter j50 and center at zero
(c) A straight line inclined at an angle
(d) A straight line parallel to the x-axis

6. A step down chopper operate from a dc voltage source Vs, and feeds a dc motor armature with a back emf Eb. From oscilloscope traces, it is found that the current increases for time tr, falls to zero over time tf, and remains zero for time t0, in every chopping cycle. Then the average dc
voltage across the freewheeling diode is

10. The amplitude modulated waveform S(t) = Ac[1 + Kam(t)] cosωct is fed to an ideal envelop detector. The maximum magnitude of Kam(t) is greater than 1. Which of the following could be the detector output?

11. In free space, the time averaged poynting vector in W/m2, for the wave given below is 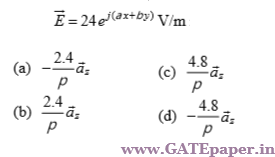 13. In the MOSFET amplifier of the figure shown, the signal outputs V1 and V2 obey the relationship 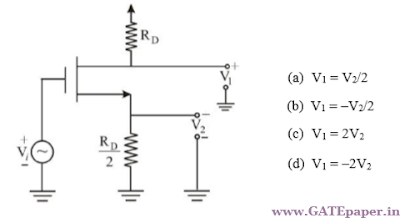 14. In a JK flip-flop, we have K = 1. Assuming the flip-flop was initially cleared and then clocked for 6 pulses, the sequence at the output Q will be 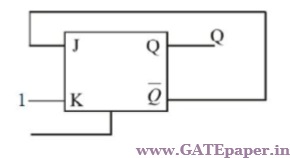 Answer: D
15. The decoding circuit shown in the figure below used to generate the actve low select signal for a microprocessor peripheral. (The address lines are designated as A0 to A7) for IO addresses. The peripheral will correspond to IO address in the range

16. A deterministic signal has the power spectrum given in the figure below. 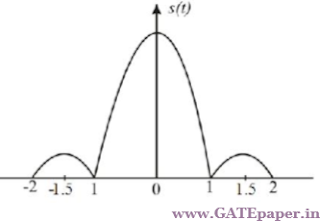 The minimum sampling rate needed to completely represent this signal is
a. 1KHz
b. 2 KHz
c. 3 KHz
d. None

20. Value of R in the oscillator circuit shown in the figure shown below, is chosen such that the circuit oscillates at an angular frequency of ω. 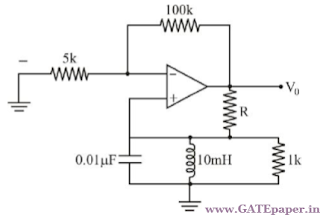 22. A uniform plane wave in air is normally incident on an infinitely thick slab. If the refractive index of the glass slab is 1.5 then the percentage of the incident power that is reflected from the air-glass interface is
a. 0%
b. 4%
c. 20%
d. 100%

23. A 12 bit ADC is operating with a 1 µsec clock period and the total conversion time is seen to be 14 µsec. The ADC must be of the
a. Flash type
b. Counting type
c. Integrating type
d. Successive Approximation type

24. The output of the circuit shown the figure below is equal to

29. The 3-dB bandwidth of a typical second-order system with the transfer function given below is

30. In the given circuit, C0 is the distributed capacitance of the coil and C is the tuning capacitor. If C = C1 for the fundamental frequency and C = C2 for the second harmonic, then the value of C0 can be expressed as 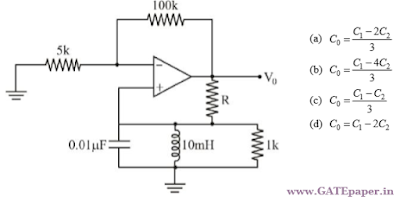 32. In the transistor circuit shown in the figure below, collector-to-ground voltage is +20V. Which of the following is the probable cause of error?
(a) Collector-emitter terminals shorted
(b) Emitter to ground connection open
(c) 10 k ohm resistor open
(d) Collector-base terminals shorted

33. A Lissajous pattern, as shown in the figure below, is observed on the screen of a CRO when voltages of frequencies fx and fy are applied to the x and y plates respectively. fx : fy is then equal to 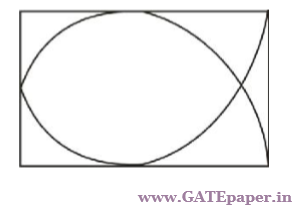 34. In a multicavity magnetron, strapping is employed primarily
(a) To prevent mode jumping
(b) To increase the separation between the resonant frequencies in the π-mode and in the adjacent modes
(c) To reduce the back heating of the cathode
(d) To increase the output of the magnetron

35. The logic realized by the circuit shown in the figure is 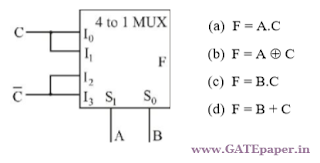 36. Figure below shows the circuit of a gate in the Resistor Transistor Logic (RTL) family. 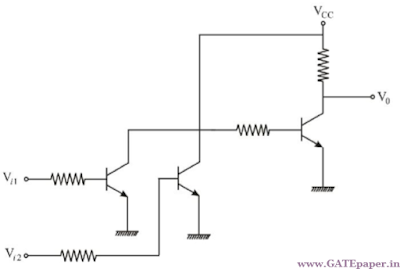 The circuit represents
a. NAND
b. AND
c. NOR
d. OR

37. The initial contents of the 4-bit serial-in-parallel out, right-shift, Shift Register shown in, Figure is
0110.

41. Two isotropic antennas are separated by a distance of two wavelengths. If both the antennas are fed with currents of equal phase and magnitude, the number of lobes in the radiation pattern in the horizontal plane are
a. 2
b. 4
c. 6
d. 8

42. Which of the following field equations indicate that the magnetic charges do not exist?

43. A 4 GHz carrier is DSB SC modulated by a low pass message signal with maximum frequency of
2MHz. The resultant signal is to be ideally sampled. The minimum frequency of the sampling in train should be
a. 4 MHz
b. 8 MHz
c. 8 GHz
d. 8.004 GHz

44. Zero mean white noise is passed through an ideal low pass filter with cut off at W Hz. The filter output will be uncorrelated at time instants spaced 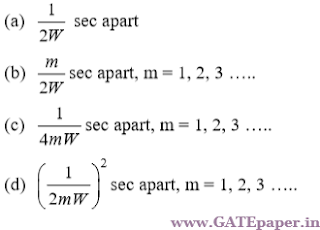 48. The impulse response and the excitation function of a linear time invariant causal systems are shown in Figures (a) and (b) respectively.

49. The open circuit impedance matrix of the 2-port network shown in the figure is 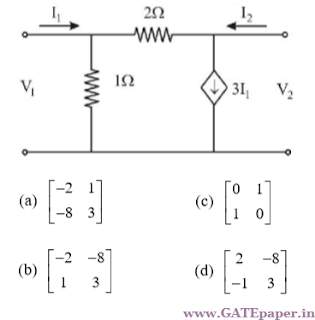 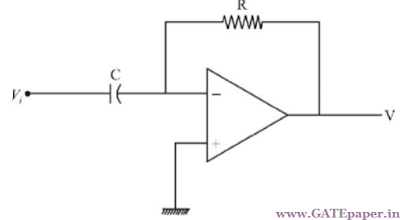 54. On a resistively terminated high frequency lossless transmission line fed by a 500 MHz source, the VSWR is found to be equal to 2 and the first voltage minimum is measured at 30 cm from the load end. What is the value of the “normalized” load resistance?
a. 3
b. 2
c. 0.5
d. 0.25

56. Which one of the following is a transferred electron device?
(a) BARITT diode
(b) IMPATT diode
(c) Gunn diode
(d) Step recovery diode

58. The input pulses to the different stage of the counter shown in the following figure must be of

59. The circuit shown in the given figure is a 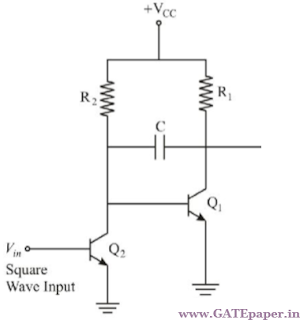 62. In the graph shown in the Figure, for the tree with branches b, d and f, the fundamental loops would include 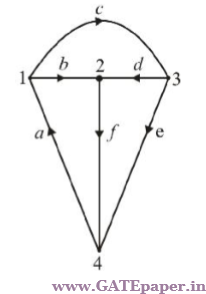 65. A, B and C are three parallel plates condensers with similar surface area of plates and similar separation. A contains air is dielectric, B contains glass as dielectric and C contains Polythene. If the electric field intensities in air, glass and polythene are respectively E1, E2 and E3 then (assume that the plates are filled with the given dielectrics)
a. E1 = E2 = E3
b. E1 = E2 > E3
c. E1 > E2 > E3
d. E1 < E2 > E3

66. The circuit diagram of an op-amp based amplifier is shown in the given figure. 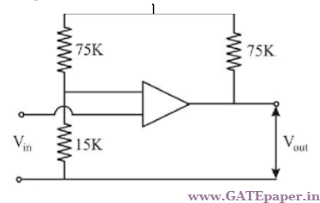 67. The given figure shows a reflectometer arrangement to measure the parameters of an over coupled one port cavity resonator of f0. With 100 mW of input power, the output power at B is 6.4 mW. What is the value of the coupling coefficient represent?

69. In π-mode operation of magnetron, the spokes due to phase focusing effect rotate at an angular velocity corresponding to
(a) One poly/cycle
(b) Two poly/cycle
(c) Four poles/cycle
(d) Six poly/cycle

70. What is the slope change at ω = 10 of the magnitude v/s frequency characteristic of a unity feedback system with the following open-loop transfer function?

73. Under what condition will the instrumentation amplifier circuit given in the Figure possess highest CMRR? ( Rs1 and Rs2 are source resistances)

74. A square waveguide carries TE11 mode whose axial magnetic field is given by

76. The semiconductor diode which can be used in switching circuits at microwave range is
(a) PIN diode
(b) Varactor diode
(c) Tunnel diode
(d) Gunn diode

77. A conductor having surface density s is embedded in a dielectric medium of permittivity ε. The electric field in the medium is E. If it is known that the pressure p on the conductor surface is equal to the electric energy density in the medium, then p (in SI units) is given by

82. A control system is as shown in the given Figure.

83. The logic circuit given below converts a binary code Y1Y2Y3 into 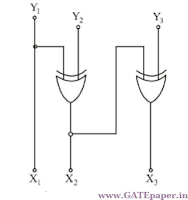 84. Which of the following oriented graphs have the same fundamental loop matrix? 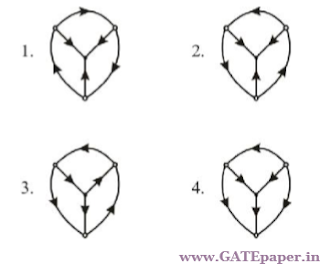 86. The arrangement shown in the given figure represents an RC potentio meter for measuring and voltage. What should be the value of C so that Vo/Vin is independent of the frequency of the input signal?

88. Two isotropic antennas are separated by a distance of two wavelengths. If both the antennas are with currents of equal phase and magnitude, the number of lobes in the radiation pattern in the horizontal plane is
a. 2
b. 4
c. 6
d. 8

90. An infinite number of concentric rings carry a charge Q each alternately positive and negative.
Their radii are 1, 2, 4, 8 ….. meters in geometric progression as shown. The potential at the center of the will be 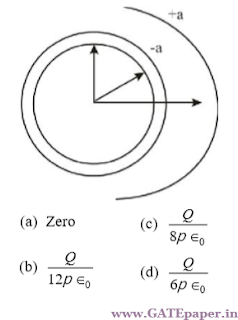 91. Two concentric square loops A and B carry equal currents in the same direction. The magnetic field at O due to the two loops A and B will be in the ratio 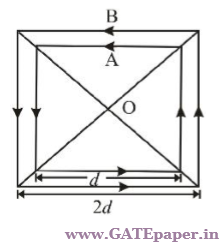 92. In the circuit shown in the Figure below X in an element which always absorbs power. During a particular operation, it sets up a current of 1 amp in the direction shown and absorbs a power Px. It is possible that X can absorb the same Px for another current I, the value of this current is 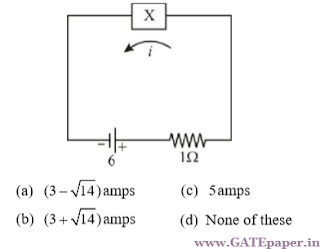 94. For the system shown in the figure below with a damping ratio ζ of 0.7 and an undamped natural
frequency ωn of 4 rad/sec, the values of K and a are

97. Viewed from the terminals A, B the following circuit shown in the Figure below can be reduced to an equivalent circuit of a single voltage source in series with a single resistor with the following parameters 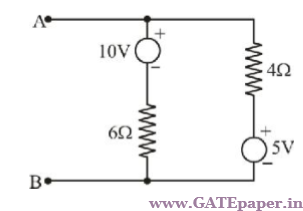 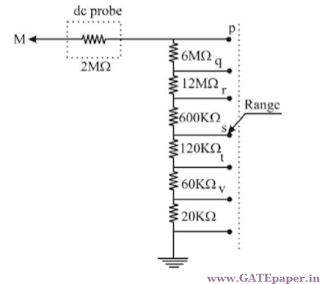 99. Figure below shows the electrostatic vertical deflection system of CRT. Given that VA is the accelerating voltage, the deflection sensitivity (deflection/volt) is proportional to 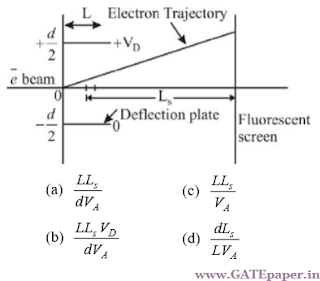 100. For a flip-flop formed from two NAND gates as shown in the figure below, the unusable state
corresponds to 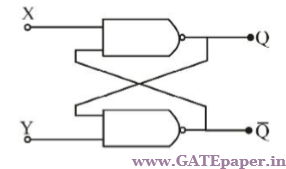